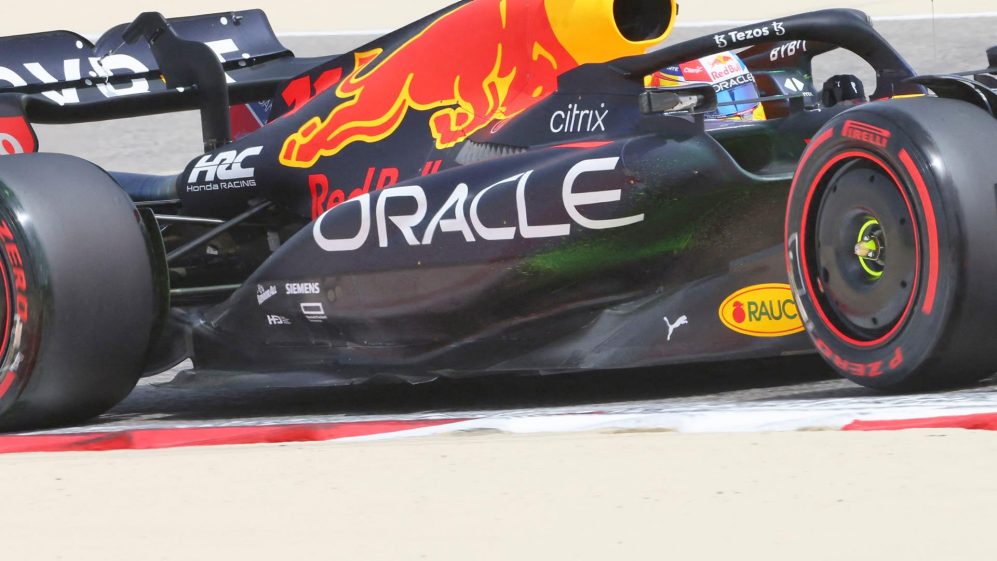 Movable skid blocks that are pushed up and disappear into the plank when the car hits the ground have evolved as an integral part of Formula 1's flexi floor maneuvers.

As part of its efforts to eliminate excessive porpoising, the FIA is increasing floor stiffness to guarantee that all teams compete on a level playing field.

Some teams have been suspected of utilizing more flexible floor components to run their vehicles lower to the ground than their competitors.

By running on a less rigid floor, teams can be more aggressive with their front rightheight to improve their performance, as there are fewer concerns about plank wear and porpoising.

Nonetheless, as part of the FIA's examination into the porpoising phenomena in Formula One, it was determined that certain teams have used gray areas to fully comply with the underfloor rules and checks while running their cars in a manner that was not intended.

Initially, it was assumed that this was primarily due to teams ensuring their flooring and planks were sufficiently rigid in sections that were inspected, but flexing in other regions.

Autosport has discovered that, as a result of the recent negotiations between teams and the FIA during this weekend's F1 Commission meeting, an even more complex strategy has evolved.

Some teams are suspected of cleverly dividing the skid blocks that shield the holes where the FIA measures the plank thickness into distinct portions.

There is a primary skid block that goes around the majority of the hole, as well as a more aft part that moves up and down independently within the plank to become totally enclosed and protected if the vehicle strikes the ground.

By disappearing up into the plank, this piece does not become worn down as the rest of the floor touches the track; hence, it maintains its original thickness throughout to be fully compatible with the FIA's previous 9mm depth tests that are performed after races.

Prior to this rule change, teams were simply required to maintain sufficient thickness in a single location of the hole, so the movable portion of the skid would have no trouble passing.

Beginning with the Belgian Grand Prix, the FIA's tests on the thickness of the floor will be modified.

In the draft TD issued to teams prior to the British Grand Prix, it was stated: "we wish to confirm that compliance with this Article would be required on at least 75% of each perimeter."

This means that teams will no longer be permitted to utilize small sections of movable skid block material to assist them comply with the requirements in a specific place.

Mercedes team principal Toto Wolff, whose team applauded the FIA's decision to act on floor stiffness, stated at the Austrian Grand Prix that two tricks had emerged from the most recent conversations.

“As a matter of fact, some teams have skids that actually disappear when the car hits the bottom,” he said.

“The reason for skids is that they are the limitation of how much plank wear you can have. And if a skid can disappear miraculously into the floor, that is clearly against the regulations.

“Then the second thing is a plank that can deflect or that basically also moves away more than the tolerance should be. The tolerance is one millimetre. And if a plank moves away many more millimetres up into the car obviously, you gain some performance there too.

“I think the first one [skid tricks] is going to disappear for Spa... because apparently skid material is not available [until then]. And the second one is going to be clarified in next year's regulations.”

Red Bull and Ferrari have been at the forefront of the focus on flexi flooring and skid block tactics this season, as the two fastest teams.

Christian Horner, the manager of the Red Bull team, is sure that his group has not been performing well.

“Maybe he’s referring to, I don’t know, cars that are around him at the moment. I have no idea, but I have absolutely no issues or concerns on our floor.”

Ferrari has stated, however, that his team will need to make adjustments in response to the explanation surrounding new floor testing.

“There will be some changes which will be required because now a new clarification has been issued with new tests which is required on new requirements, new specification,” he said.

“It will take some time to do it, so at least I think it's good to relax it to Belgium because [porpoising] not being a subject, there is no need to rush.”